A review of rusle model

In this paper, we attempted to review the soil erosion studies conducted throughout the globe using Revised Universal Soil Loss Equation (RUSLE). We searched the SCI, Scopus, Web of Science, Google Scholar database and various theses for this study. Though RUSLE is the most widely used model for estimation of soil erosion, the factors, namely rainfall erosivity, soil erodibility, slope length and steepness, cover management and conservation practice; vary greatly over different climatic zones, soil properties, slope, land cover and crop phase, respectively. Depending upon those variations, researchers have developed various sets of equations for different factors of RUSLE. These equations can be useful to map soil loss for many places on this planet. 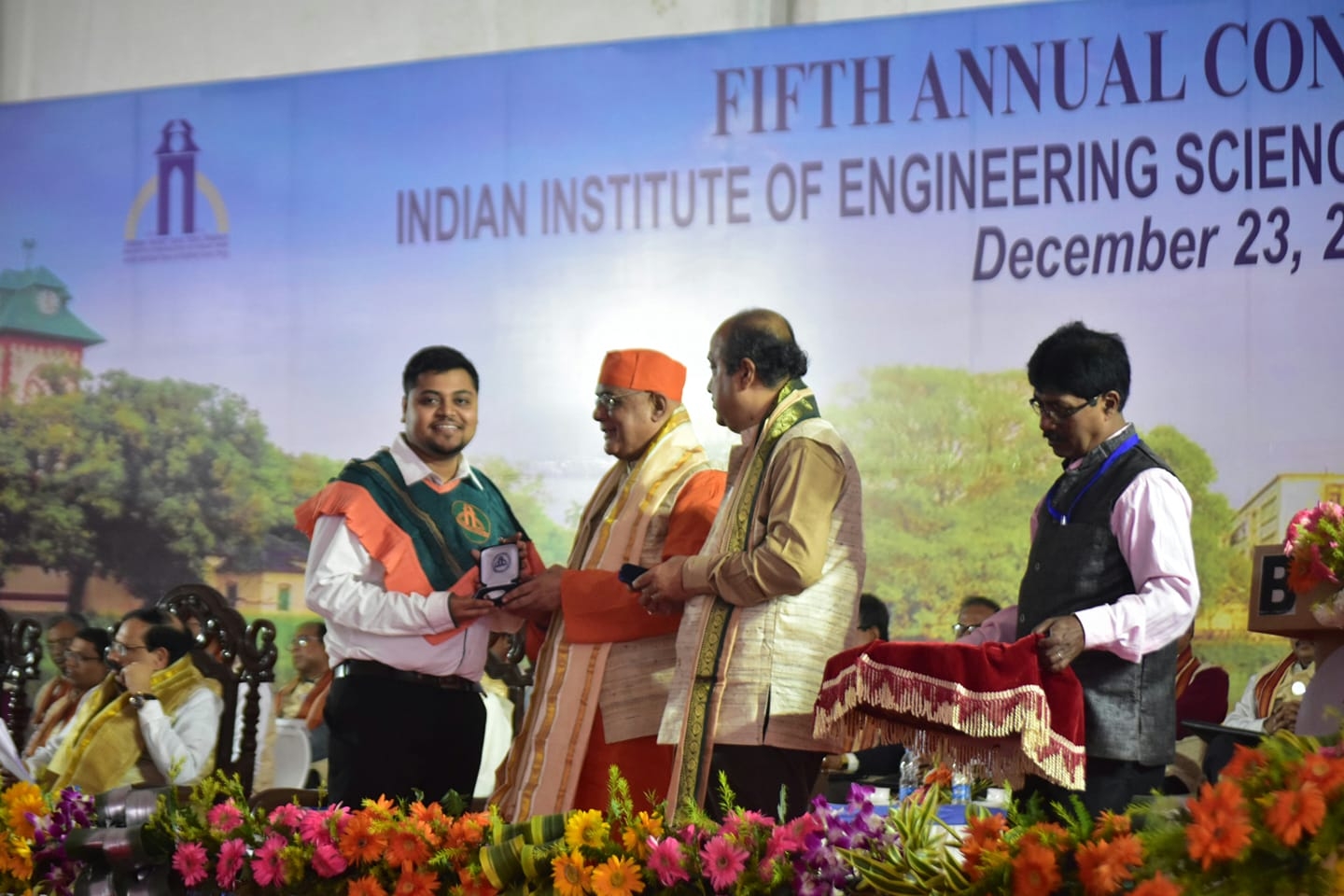 The identification of isomorphism in epicyclic gear trains has been found a lot of attention by researchers for the last few years. Various methods have been suggested by different authors for the detection of isomorphism in planer kinematic chains and epicyclic gear trains (EGTs), but everyone has found some difficulties to address new issues. In this paper, a modified path matrix approach was presented in order to compare all the distinct geared kinematic mechanisms. A new method based on the matrix approach and corresponding train values is required to identify isomorphism among epicyclic gear trains and their mechanisms. The proposed method was examined on the basis of various examples from four-link, five-link, six links, and eight-link one-degree-of-freedom EGTs and six links two-degree-of-freedom EGTs. All the examples have been found satisfactory results with existing literature.

A review of thermal performance of solar concentrator – the future needs

Many people are distracted from the normal lifestyle, because of the hearing loss they have. Most of them do not use the hearing aids due to various discomforts in wearing them. The main and the foremost problem available in it is; the device introduces unpleasant whistling sounds, caused by the changing environmental noise, which is faced by the user daily. This paper describes the development of an algorithm, which focuses on the adaptive feedback cancellation, that improves the listening effort of the user. The genetic algorithm is one of the computational techniques, that is used in enhancing the above features. The performance can also be compared with other comprehensive analysis methods, to evaluate its standards.

The Construction Industry is one of the industries contributing highest GDP in Indian economy. The material that is most chosen in construction Industry is concrete. Concrete is a material made with Cement, Fine aggregate in the form of sand, Coarse aggregate in the form of gravel and water. With increasing scarcity of sand, construction works are coming to jolt and thereby increasing the need for choosing an alternative material. Vermiculite is a material which after exfoliation can be used as a filler material replacing sand partially without affecting strength much. One more material Granite (by product which is a waste is causing lot of environmental Issues), produced from granite industry, is available in India in several million tons. Coarse aggregate generally used is a crushed aggregate obtained from rocks like granite, basalt and soon. Recycled aggregate is an aggregate which is obtained after demolishing of an existing building, which is a waste causing economical in balance and which if put into use can not only decrease the construction cost but also make this waste into a better use. In the present study, for a M35 grade of concrete, Vermiculite (0, 5%, 10% and 15% of weight of sand) and granite powder (fixed at 10% of weight of sand used) is used to replace sand partially and in the place of normal coarse aggregate, recycled aggregate is used which is 20 mm passing and 12 mm retained After preparation of Mix-Design(1:1.83:2.69 with w/c ratio of 0.38) the concrete cubes are casted to test for compressive strength after curing for 28 days, 56 days and 90 days. Forsec brand super plasticizer is used to take care of workability requirements. Durability test in the form of resistance to attack of sulphuric acid was conducted along with compressive strength. The test results were promising at 10% replacement levels of Vermiculite.

A study on mechanical properties and durability of vermiculite concrete

Concrete is a material which is used in construction. Weight of concrete plays a major role in the construction industry. If the weight of the concrete is increased, it will pose more structural problems on the later date of construction. It also increases the cost of construction, without any specific benefit. So if lightweight concrete is used, it not only reduces cost of construction, but also not poses any structural problems unnecessarily. Light weight concrete also aids workers in smooth handling of materials. In this study, vermiculite in the form of exfoliated form is used to replace partially natural sand. By this action dead weight of the structure is reduced. Once the dead weight of structure is reduced, it in turn reduces cost of construction. In this study three mixes were casted with the cement content of 383 kg/m3 in M20 concrete and the water cement ratio of 0.45 is chosen. Vermiculite at 10%, 20% and 30% are choosing to partially replace the natural sand. The Tests conducted on concrete for evaluating mechanical properties include compressive strength and split tensile strength. For evaluating durability properties, tests like acid resistance, sulphate resistance, chlorine penetration and water absorption.

A Man-Machine System means an activity occurring/occurred with the involvement of a human being with the help of some tools used to interact with the material. In small foundries, the moulding process is manual & labours have to work in different psychological moods, stress, and strain, without training on ergonomic posture, in different environmental factors such as temperature, vibrations, noise dust which affects productivity and also the amount of human energy input to produce the component. This paper makes an attempt to develop a mathematical model to relate productivity with various parameters and identify the most sensitive parameter to control productivity.

In this paper, an approach for formulation of generalized field data based model for cylinder head moulding operation. The aim of field data based modeling for cylinder head moulding operation is to improve the output by correcting or modifying the inputs. The goal of the research is to reduce human energy input required while performing cylinder head moulding operation. With the reduction in human energy input, automatically, the productivity of the process will also increase. The study identifies important ergonomic and other work environment related parameters which affect productivity. The identified parameters are properties of sand, physical dimensions of tools, energy outflow of workers, anthropometric data of the workers, working conditions like relative humidity, ambient temperature. Out of all the variables, responses and causes are identified. After dimensional analysis relationship between the dependent and independent parameters, a mathematical model is established having a relationship between output parameters and input. To get the optimized values model is optimized using the optimization technique. Sensitivity analysis is a tool which can be used to find out the effect of input one parameter over the other. The model will be useful for an industrialist to select optimized inputs so as to get targeted responses.

Distributed Generators (DGs) are incorporated in the power distribution systems to develop green energies in microgrids. Islanding is a challenging task in a microgrid. Different types of islanding methods, e.g. local and remote methods, have been developed for handling this task, with local methods being easier to implement, while remote methods are communication-based and costly. The local methods are classified as passive, active, and hybrid, out of which the passive methods are more simple and economical. In this paper, a passive islanding detection method is proposed to detect single line to ground fault. This fault is considered to represent the 60 to 70% of the total un-intentional faults of this category. The available passive methods cannot detect islanding at lower power mismatches as the variations in voltage and frequency fall within thresholding values. In this method, the voltage signals are first retrieved at the targeted DG output and then the phase angle is estimated. Finally, the phase angle is differentiated to get Rate Of Change Of Voltage Phase Angle (ROCOVPA) to detect islanding, and then it is compared with the Rate Of Change Of Frequency (ROCOF) at zero percent power mismatch. Simulation results depict that the ROCOVPA is more effective than ROCOF. The proposed method not only reduces detection time and NonDetection Zone (NDZ) but is also stable during non-islanding cases like load connection and disconnection to avoid nuisance tripping.

Abstract- The injection of the PV Grid power into an electric grid affects the power quality. The influence of the PV Grid in the grid system concerning the power quality measurements and the norms followed according to the guidelines specified in the International Electro technical Commission standard, are the active and reactive power variations, variation of voltages, flicker, harmonics and electrical behavior of switching operations. The work study demonstrates has overall good functional characteristics, better performance and faster response than existing systems. The proposed system of having STATCOM is smaller in size and less costly when compared to the existing system. In this proposed system static compensator (STATCOM) is connected at a point with a battery energy storage system to reduce the power quality issues. The effectiveness of the proposed scheme gives the reactive power demand of load and the induction generator. Simulation is done by using MATLAB / SIMULINK-Sim power system software.

Improving the agricultural productivity is an imminent need to meet the food requirement of constantly growing population rate. It can be gracefully satisfied if the farming process is integrated through technologies such as big data and IoT. The integration of agricultural processes with modern technologies has emerged as the smart agriculture technology. This research work is focused on proving the suitability of the big data analytics for smart agricultural processes in terms of increasing production and quality of yields with less resources and overhead. This research paper expounds the extensive review carried out on the related works in smart agricultural farming, challenges in implementing the smart farming technologies at large scale, followed by the conceptual framework model for the effective implementation of big data together with IoT devices in smart farming.

Frequent power outages arising from poor state of electricity infrastructure is hindering Nigeria’s socio-economic growth. Port Harcourt is one of the foremost cities in Nigeria where business and social activities are becoming rapidly more dependent on electricity. Any power outage, even of the shortest duration, in Port Harcourt City has severe socio-economic impacts and there is no likelihood that the phenomenon would abate even in the nearest future. This research investigated the causes of incessant power outages in Port Harcourt City and suggested remedial measures to reverse the trend. The researcher relied on datacollected from primary sources through personal observations, interviews and discussions with residents of the City and from secondary sources such as the National Bureau of Statistics (NBS), the Manufacturers Association of Nigeria (MAN) and current scholarly literature relating to this research, over a period of twelve months. The study used a descriptive and the non-parametric simple percentages technique in analysing the data so collected and in drawing conclusions. It was found that inadequate power generating capacity, shortage of gas, weak and dilapidated electrical transmission and distribution network, inadequate power infrastructure facilities, etc. are the chief causes of incessant power outages in the Port Harcourt metropolis. The paper recommends, among others, immediate upgrade of existing power infrastructure facilities, review of government policy on domestic gas supply and stiff statutory legislation on vandalism as measures to stabilise electricity supply in the Port Harcourt city.

Bharatividyapeeth Deemed To Be University